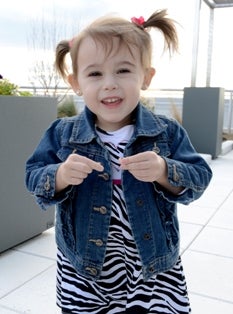 Allison East was 24 weeks pregnant when an ultrasound showed her baby had an alarming defect. Her heart was on the right side of her body. Tests later showed she had a congenital diaphragmatic hernia (CDH), a hole in the diaphragm (the muscle under the lungs used for breathing) that allows organs from the abdomen to move into the chest. It is a life-threatening condition that is often treated with surgery.

Allison was under the care of specialists and when her daughter Rylee was born, three weeks early. The infant was immediately transported to Children’s of Alabama. “She wasn’t stable enough to breathe on her own at that point,” Allison recalls. But by day six she had gained enough strength that doctors felt she was healthy enough to undergo hernia repair surgery.

During the surgery, pediatric surgeons put Rylee’s organs back in her abdomen and in time her heart moved back to its usual position on the right side. After five weeks, she was finally able to go home.
Allison and her husband Nick thought the worst was behind them. But when Rylee was about 6 months old, they were told their daughter had infantile scoliosis, an S- or C-shaped curve in the spine that can be caused by CDH. To correct the problem as she grows, orthopedic doctors at Children’s recommended meta casting. The process involves applying a series of plaster casts around the torso to help mold the baby’s soft bones and work with her growth spurts. Casts are replaced every few months as the child grows.

“Rylee has worn each cast for two months,” Allison says. Rylee, who turned 2 in September, cried when she was put in her first cast. The casts weigh about 2 pounds each and cover her torso. Rylee had to learn how to sit up again, and the cast delayed her ability to walk. But, Allison says, “As long as it is helping her, we are going to continue the process.”

Rylee is scheduled to get her fifth cast soon, provided tests show the casting is still working. If not, she may have to undergo surgery. Allison says she doesn’t know what the future holds for her little girl, but she is hopeful. “It’s been going well so far, so we are taking it day by day and hoping for the best.”