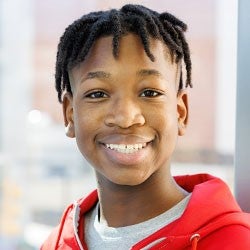 Jaquavion “Qua” Johnson was born in September 2006. As a doctor was checking on the infants in the local hospital nursery, his attention quickly turned to Qua as he was turning blue. He was stabilized then airlifted to Children’s of Alabama. Doctors there determined he had a congenital heart defect called tricuspid atresia, a surprise to mom Marquitta Rivers.

“No one had a clue he was sick at birth,” Marquitta said.

At five days old, Qua had the first of a series of open-heart surgeries that are customary for his diagnosis. Tricuspid atresia happens when the heart’s tricuspid valve does not develop, therefore blood can’t flow from the heart’s right atrium (upper receiving chamber) to the right ventricle (lower pumping chamber) as it should. Marquitta recalls her “tough cookie” of a son riding around the hospital at age 2-1/2 in a Little Tikes Cozy Coupe, recovering quickly after his last surgery.

At age 5, he joined a local soccer team, and Marquitta noticed that running took a toll on him. Qua moved on to baseball for a few years, and he would tire more quickly than his teammates. But then he discovered basketball and thrived. “He practiced and played harder each season to improve his game,” Marquitta said. “As long as his heart would let him, he worked hard.”

By the time Qua reached middle school, Marquitta noticed that Qua was even more tired, withdrawn and experienced frequent stomachaches. She was worried he was dealing with any number of concerns a mom of a teenager would have – was it depression, bullying at school, problems with friends? “He is my child, and I knew something was wrong.”

In early March 2021, a series of visits to his hometown pediatrician, emergency departments and cardiologists provided some clues. Marquitta came home one afternoon to find him crying. “Mom, I can hardly breathe,” he said. She booked an appointment with his pediatrician for the following day, but by that evening, Qua’s symptoms worsened, and Marquitta took him to an emergency department in Columbus, Ga., a 45-minute ride from home. They did a CT scan, an X-ray and EKG. He needed oxygen. “That’s when I knew something was wrong.”

The pediatrician urged Qua and Marquitta to return to Columbus where many of the previous tests were repeated. Still without answers, they drove back home, when that evening, Marquitta noticed a missed call on her cell phone. It was from a cardiologist at the Columbus hospital. In his voicemail, he explained that Qua’s case caught his eye. As Marquitta listened to the message, Qua was lethargic on the sofa. The doctor advised them to go back to the hospital so that Qua could have an echocardiogram.

By the next morning, Qua’s bloodwork and tests indicated that he needed more than just tests. “The doctors said they didn’t understand how Qua was up and walking around. Something wasn’t right with his heart,” Marquitta said. The doctors requested that Qua be transported to Children’s of Alabama for evaluation and treatment. She went back home long enough to gather up essentials for what she thought would be a few days in Birmingham and began the three-hour drive as Qua was flown to Children’s.

His heart wasn’t pumping well. The medications weren’t helping. All that was left was a heart transplant. “He was worried and scared about the idea of a heart transplant,” Marquitta said. “I needed him to know exactly what was going on. I didn’t sugarcoat it, didn’t want him to be worried. He had a big smile on his face once he realized a new heart would give him a better life.”

He joined the transplant list April 3, 2021. While many patients wait months or even years for a new heart, Qua’s critical condition helped the team at Children’s of Alabama find a heart for him less than two weeks later. Before Marquitta told Qua, she went to the gift shop and bought some heart-shaped balloons. When she got back to Qua’s room, he had his back to the door. When he turned around, she said to him, “Qua, are you ready for your life to start? You’re getting your new heart today.”

Marquitta got updates from the transplant team over the next eight hours. By the time she saw him in recovery, he was connected to multiple IVs and machines. “He looked at me as if to ask if all was OK. He grabbed my hand and nodded his head to tell me he was OK. Then he did the same with his dad. And then he went back to sleep,” Marquitta recalled. And just one month later, Qua was discharged ready to take on life with his new, healthy heart.

“I don’t know what the good Lord has in store for him, but I know it’s something,” Marquitta said.