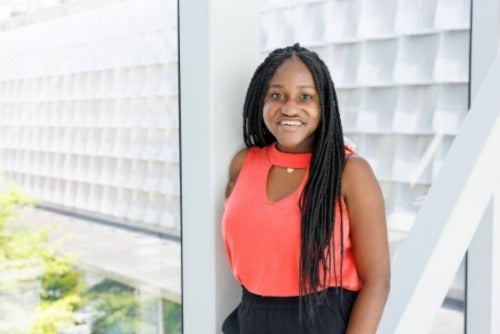 Sydney Sheppard knew she had a hard road in front of her when she was diagnosed with osteosarcoma. What she didn’t quite know is that the journey would lead her to a lifelong decision to help others.

It all began when Sydney was 13 years old, and she began experiencing arm pain. A middle schooler at the time, she dismissed the pain for a while, but a warm Christmas Day—which meant short sleeves that didn’t hide her arm—revealed something bigger was wrong. “My mom noticed how red and swollen my arm was,” Sydney says. “She wanted to take me to the emergency room that very day.”

They decided to wait until the next day, and Sydney knew something was wrong when the pediatrician called them back almost immediately after the x-ray. “They thought they saw a tumor on my arm, and they thought it was cancerous,” she says. “She was urging us to go on to Children’s to get it checked out.”

Sydney did go on to Children’s of Alabama, where a biopsy revealed it was osteosarcoma, a cancerous tumor in a bone. Doctors suggested a treatment plan of high dose chemotherapy to be started right away and last for a year. “I was taken aback,” Sydney says, “because it just didn’t feel real at the time. I was still processing my dad’s death, who had died just six months earlier from leukemia, so I couldn’t believe that I was sitting there with that diagnosis.”

After a few months of chemotherapy, Sydney proceeded with the other requirement on the treatment plan: limb salvage surgery. The plan for Sydney’s limb salvage surgery was to remove her humerus bone on her right arm, where the tumor was located, and replace it with a cadaver bone. The surgery was successful and she soon began physical therapy to relearn how to utilize her arm. “That very next summer, I was struggling to bend my arm,” Sydney says. “Thankfully, I had been at Camp Smile-A-Mile, and they suggested I have it looked at.”

When Sydney returned home from camp, she was back once again at Children’s for a look at her arm. Doctors performed a biopsy, and it was soon discovered she had relapsed. “We found out that I couldn’t bend my arm because there was a tumor there,” she adds. “It explained a lot, but it also led to a big decision of what to do.”

After great consideration and consultation with other specialists, Sydney’s oncologist, Dr. Pressey, felt that another limb salvage surgery would lead to another relapse or spreading of the cancer. At the time, it was thankfully still isolated to her arm, so amputation was the recommended course of action. “I was devastated with that recommendation because I knew I wanted to become a physician before all of this happened, and I didn’t know any doctors with just one arm,” Sydney says. “I was so upset about it that I had to leave the room. A Child Life Specialist came and talked with me and shared a story with me about a surgeon she knew that lost a limb and that he was still working just fine. That opened my eyes a little bit.”

After great consideration, Sydney decided to go with the recommendation of amputation. “It was a really tough decision, which my mom let me make,” she says. “What made it even harder was that it was not only my right arm, but it was my dominant hand, and I was at a rigorous magnet high school at the time. It was a lot to handle.”

Though it was tough, Sydney shined. She went on to graduate from high school and then the University of Alabama at Birmingham (UAB). Fulfilling her dream, she will shortly be graduating from UAB’s Heersink School of Medicine and heading to Lurie Children’s Hospital of Chicago for a pediatric residency. Her goal is to one day pursue a fellowship in pediatric hematology/oncology, helping other children on a journey she once walked herself not so long ago.

“The doctors and nurses at Children’s helped prepare me for this more than they know,” Sydney says. “When I was in the hospital, those doctors and nurses became like family to me. They were there with me through everything, and Dr. Pressey was the best mentor to me. I’m excited to help other children when they are going through the scary situations like I once did while also showing that people with physical challenges CAN and SHOULD pursue medicine too.”