Loss of Scalp and Left Ear 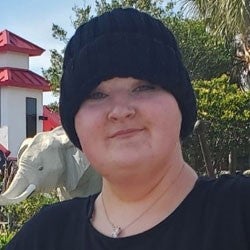 Stoney is an outgoing 16-year-old with an amazing spirit. She is the youngest of three girls and is a part of her high school band drum line, likes playing volleyball, and is on her church drama team in her hometown of Brantley. In the summer of 2019, she was involved in an accident that completely removed her scalp, her left ear and other facial features.

Stoney was helping her dad build a carport awning on their family farm, as he was digging holes with a tractor to insert the poles. Standing by the tractor, Stoney turned quickly, and her long hair caught the rotating shaft that powers another piece of equipment. The machinery totally removed her scalp, the left ear, eyebrows and part of her eyelids. Her father was on the opposite side of the tractor when he heard her scream. He immediately rushed Stoney to Mizell Memorial Hospital in Opp.

“I was at work when the accident happened,” said Stoney’s mom, Jammie Odom. "A friend called me and told me there was an accident, but I didn’t find out what happened or her condition until I arrived at the hospital and talked to the doctor,” she said.

Stoney was flown promptly by lifesaver transport to Children’s of Alabama in Birmingham. Surgeons Dr. Rene Myers and Dr. Prasanth Patcha tried to reattach Stoney’s scalp using veins and arteries from her leg, but her scalp would not grow back to her head. Within two weeks, they removed the scalp and performed a skin graft to cover the area.

During her month-long stay in the hospital, Stoney experienced a number of obstacles, including regaining the use of her eyelids that had lost their muscle tone. “Even though Stoney was not well, the staff at Children’s tried to make us feel as comfortable as they could,” said Jammie. “During that time, they helped put some normalcy in our lives,” she said. “They are amazing!”

Today, Stoney is in good health, although extreme silence and loud noises cause her post-traumatic stress disorder (PTSD), which is a re-experience of a trauma in the form of flashbacks or anxiety.

She has periodic checkups at the hospital and will be undergoing another surgery to attach a left ear. Dr. Myers and Dr. Kilic will use a manmade material in a procedure known as a pre-laminate total ear reconstruction. The outer ear construction will be imbedded into her forearm for a few months to help grow skin tissue and its blood supply around it. It will then be removed from her arm and attached to the side of her head. Children’s is the only hospital in Alabama that has the high-tech equipment to perform this type of procedure.

“It’s a pretty rare surgery, and to my knowledge, this particular version hasn’t been done in Alabama,” said Dr. Myers. “The new scope is a Leica OH-X Microsurgical Scope, which is a dedicated scope for microsurgery at Children’s and is utilized by our team for a variety of cases, including these sorts of ‘free flaps’ and also delicate hand surgery, such as replantation,” he explained.

Over the past two years, Stoney and her mom have enjoyed giving back to Children’s. They have participated in the Children’s Dothan Radiothons to help raise money. “The hospital has helped us so much, that I will never take them for granted for all they do,” said Jammie.

As for Stoney’s continued progress, her mom says, “She always takes things in stride and still loves to smile. From the day she was born, I have always called her my exclamation point, and rightly so!”