Kennedi Small and her Sister and Bone Marrow Donor, Hayli 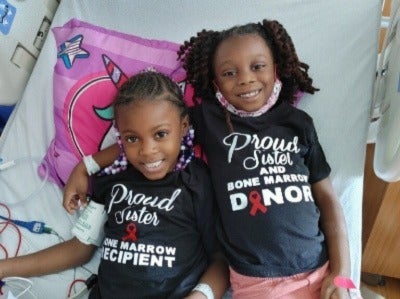 Collette Small had a few blissful days with her newborn, Kennedi, before a blood test revealed exactly what they didn’t want to hear: sickle cell disease. “It shouldn’t have been a surprise because her father and I both have the sickle cell gene, but it’s obviously not anything you ever want or expect to hear,” Collette says.

As soon as Kennedi was diagnosed, Collette was educated on what to look for if—and when—a problem was presenting itself. It actually took a few months before the problems ever started. When Kennedi was about five months old, her hands began to swell. “That was her first episode, or at least we thought she was having an episode,” Collette says.

As a member of the military, Collette was stationed in Virginia at that time, so she took Kennedi in to a hospital there. They confirmed Kennedi’s swollen hands were, in fact, because of sickle cell. Doctors immediately started her on medication to relieve the swelling. “It took a few days, but it worked,” Collette says. “We got to go home, but we were armed with medication to take with us in hopes that every swelling episode wouldn’t send her back to the hospital.”

Kennedi was able to go another few months before ever having another swelling episode, but each episode kept sending her right back to the hospital. By that point, Collette was away on active military duty, so Kennedi was staying in Alabama with her grandmother, Helen Small. Helen immediately brought her to Birmingham to visit Children’s of Alabama. “We were definitely more comfortable there with the doctors and nurses treating her rather than trying to manage it at home,” Collette says. “They were so great at helping ease her pain and making her comfortable while we waited for the swelling to go away.”

It soon became clear to Collette a long-term solution was needed to provide Kennedi with a better quality of life. She had already done some research about cures for sickle cell and knew that a bone marrow transplant was it. Collette spoke with Kennedi’s hematologist, Dr. Christina Bemrich-Stolz, who referred her on to Dr. Haines and the Children’s Bone Marrow Transplant program. “By this time, my husband and I had another baby, Hayli,” Collette explains. “Part of the potential for the bone marrow transplant was having a matched sibling donor, so we decided to check and see if Hayli was a match.”

Testing revealed Hayli was a 10/10 match for Kennedi, so they began moving forward with the transplant. Another bonus was that the family had saved the cord blood when Hayli was born—cord blood helps boost the bone marrow in the transplant. After going through some required rounds of chemotherapy, Kennedi went in to Children’s for her transplant. “It went great,” Collette says. “She got to go home earlier than expected because she was doing so well.”

While Kennedi went home on multiple medications—14 to be exact—she is now down to one. She is also down to fewer checkups since she has done so well since her transplant. Now, at the age of eight, Kennedi’s biggest focus is on her favorite pastime, cheer, and modeling for the camera. “She has done so incredibly well,” Collette says. “She hasn’t even been back in the hospital since the transplant. I can’t express our love for Children’s enough. Everyone was so kind and caring. They truly cared about doing what was best for Kennedi.”