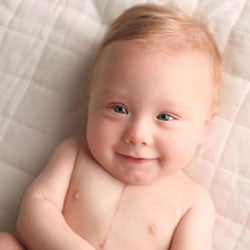 The signs and symptoms of an underlying heart condition for Colt West were there practically from birth. His parents, Zac and Laura, knew something was wrong soon after he was born, but getting to a diagnosis seemed impossible. “This was our second child, and we could just tell something wasn’t right,” Laura says. “Nothing ever made him comfortable, and he frequently seemed like breathing was a struggle.”

Colt also wasn’t eating well, and while Laura took him to the pediatrician multiple times, the symptoms kept getting attributed to colic or bronchitis. Thankfully, Zac and Laura didn’t give up and asked for a referral to the cardiology clinic at University of Alabama at Birmingham / Children’s of Alabama. “This had been going on since he was born, and he was now five weeks old,” Laura stresses. “I’m so thankful we went with our gut because of what was discovered next.”

At the cardiology clinic, the family met with Dr. Carlo, who performed an echocardiogram of Colt’s heart and diagnosed him with atrioventricular canal defect (AVC). AVC occurs when there’s a hole between the four chambers of the heart and one valve instead of two valves between the atria and ventricles. “It was such a shock, even though we knew it wasn’t something as simple as bronchitis or colic causing Colt’s symptoms,” Laura says. “After Dr. Carlo told us, the next few days were just a blur. But Dr. Carlo stressed that he was here for us if we have any questions, and he let us ask lots of questions as we were able to process the diagnosis. He was so kind to talk with us as long as we needed in order to understand.”

While the family was striving to process the diagnosis and the fact that Colt would need open heart surgery, they were also trying their best to help Colt gain weight. Dr. Carlo’s goal was to wait a month or so for Colt to gain some weight before Dr. Dabal would perform the surgery. They worked with a child nutritionist at Children’s who specializes in children with heart disease, but when Colt was unable to gain weight eating by himself, a feeding tube was inserted to help him. While some improvement was made, it wasn’t much. “His little heart was just working in overdrive, so everything he took in was quickly burned all off because of it,” Laura says.

After about a month, doctors decided it was best to go ahead and schedule Colt’s surgery to repair the heart defect. “At the point of surgery, there was relief but there was also fear,” Laura says. “It’s hard to watch your child struggle every day, so we were relieved the surgery would help him get better, but having your baby go through open heart surgery obviously causes a lot of fear.”

The surgery seemed long—it lasted six hours—but it was successful. The hole between the chambers was successfully closed, but in forming two valves out of one valve, there was insufficient tissue and Colt was left with mitral valve regurgitation, which might mean another surgery down the road. After just a week in the hospital, Colt was discharged to go home. “He has done so well,” Laura says. “He now runs around and plays and you’d never know anything was ever wrong. No one ever wants to be in a situation where their child is sick, but when they are, I can’t imagine anywhere better than Children’s. They went above and beyond to answer our questions and take the absolute best care of Colt. They literally walked with us through every part of it and still call to check on him to this day.”