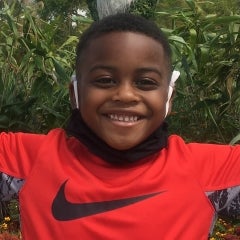 Two-year-old Marcus Hudson arrived at Children’s of Alabama in early January 2018 via ambulance from an outside hospital with severe respiratory symptoms. He had been diagnosed with bacterial pneumonia and the flu. He had difficulty breathing, worsened by asthma.

During that ambulance ride to Birmingham, mom Karlonda Wainwright said she was “eerily calm.” Once at Children’s, though, the team quickly sprung into action all around her. Marcus required immediate intubation and was admitted to the pediatric intensive care unit (PICU). After 2+ weeks of mechanical ventilation with recurrent air leak requiring multiple chest tubes, Marcus had seemingly reached maximum medical care.

But Dr. Santiago Borasino, medical director of the cardiovascular intensive care unit, in collaboration with the PICU team, presented the family with a plan that could save Marcus. Wainwright describes it years later as “one of the scariest days of my life.”

Extracorporeal Membrane Oxygenation (ECMO) is a heart-lung bypass machine to help critically ill patients like Marcus get oxygen to his blood while giving his heart and lungs the chance to heal. It is only used after all other medical treatment has failed and the odds of survival without it would be less than 20 percent.

“ECMO allowed us to disconnect his injured lung from the ventilator.  The ventilator was keeping the leaks open every time it would inflate the lung.  Once you are on ECMO, you don’t fully depend on your lungs to oxygenate.  So, with the help of cardiac anesthesia, we placed the breathing tube deeper, into his “good” lung.  The lung with the leak can then be left alone to heal, not getting the pressure and volume that was keeping the leak/hole open,” Dr. Borasino said.

Wainwright said the staff did an excellent job explaining to her why they were recommending ECMO and how it would work for Marcus.

“His lungs needed a chance to rest. His body was tired,” Wainwright said. “Dr. Borasino and all the right people were there that day to get Marcus started with ECMO. It was God’s plan.”

Within the first week on ECMO, Wainwright said, Marcus began to show gradual signs of improvement. He was on ECMO for three weeks total. “Marcus did the healing, we just gave him a chance. He is a strong boy,” Dr. Borasino said.

Marcus celebrated his 3rd birthday – March 6 –  while recovering in the hospital. A few weeks later, the trach was removed, and he triumphantly rode a tricycle out of the unit upon discharge.

In 2021, Marcus is a happy six year old who has only experienced mild colds and an occasional asthma flare up since his ECMO treatment a few years ago. He doesn’t recall much about his hospitalization but mentions his ‘necklace’ – the trach – every once in a while.

Marcus is looking forward to attending 1st grade in person in August 2021. His kindergarten year was fully remote due to the school system’s COVID-19 protocols. Marcus is a dinosaur expert and enjoys spending time outdoors. “He is the bubbliest child, full of joy,” Wainwright said.

Children’s ECMO Center is equipped with eight machines and, in 1987, was one of the first pediatric hospitals in the Southeast to offer ECMO. Since that time, Marcus is one of the more than 900 other children who have received the treatment – an average of 50 cases per year.

Wainwright knows ECMO saved her child’s life, but she credits her faith and offers advice for any families who find themselves in a situation like she did with her son Marcus. “I had to be calm. I couldn’t show him that mama was scared,” she said. “Pray. Keep the faith. Trust the doctors.”