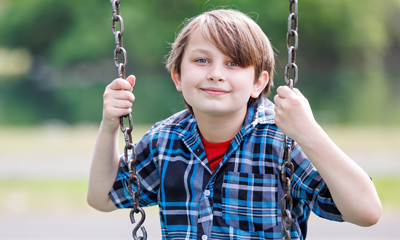 Cancer diagnoses are nothing to celebrate. As Daniel Walker puts it, “no cancer is good.” But when Walker found out the specific type of cancer his son had, he considered it good news.

Daniel’s son Asher was diagnosed with leukemia in January 2016. Asher had turned 5 years old just two weeks prior, and according to Daniel, he had been a “normal, regularly active child” up to that point.

That changed in one weekend. The weather was freezing in central Alabama, and Asher was pale and seemed to have a cold. By Monday morning, his symptoms had worsened, so Daniel decided to keep him out of school. On the way to the bathroom that morning, Asher stumbled, fell on the floor and began vomiting.

Daniel knew something was wrong, so he set up an appointment with Asher’s pediatrician. That doctor sent him to Children’s of Alabama, where after a series of tests, physicians determined that Asher had leukemia. Initial results suggested he had acute myeloid leukemia (AML), a type of cancer that requires intensive chemotherapy treatments followed by months in the hospital recovering from each treatment cycle. He might even need a stem cell transplant–one of the most intensive types of leukemia treatments.

When Daniel found out, he went numb.

“(My body and mind) almost went into like auto-pilot mode,” he said. “It’s like it compartmentalized any emotion that I was feeling because I knew I was the only one that he had to be able to deal with this.

“It wasn’t until later where I had that break of: Oh, my God, I nearly lost my son.”

As Daniel was still processing the diagnosis, doctors at Children’s were doing more genetic tests on Asher’s leukemia cells. Two days later, they had more details. Asher had a specific subtype of AML called acute promyelocytic leukemia (APL). Historically, it has been extremely difficult to treat.

Patients with APL need aggressive treatments, such as cytotoxic chemotherapy. They typically become very sick from both the disease and its treatments, and less than half are cured. In the 1980s, only 25% of APL patients might be alive and free of leukemia five years later, according to Dr. Malcolm Smith of the National Cancer Institute.

But in January 2016, when Asher was diagnosed, Dr. Matthew Kutny, a pediatric hematologist and oncologist at Children’s of Alabama, was in the early stages of a clinical trial using a new APL treatment. It involved a regimen of arsenic trioxide and all-trans retinoic acid (ATRA). If Asher joined the clinical trial, he could be treated for APL without needing chemotherapy. Asher would be exposed to far fewer toxins and spend less time in the hospital. One doctor told Daniel a diagnosis of APL was best news he could have hoped for.

“It was a no-brainer,” Daniel said. He enrolled his son in the trial.
Initially, it wasn’t easy. Daniel remembers nights during the first two weeks when Asher’s oxygen levels would fall, and doctors would come into Asher’s room with a portable X-ray machine to check him out.

But Kutny had warned Daniel to expect this, and eventually, Asher’s symptoms improved with the supportive care given by his medical team. Soon, Asher was able to leave the hospital and receive treatments in the outpatient clinic. He was even able to go to the grocery store with his dad on the way home from treatments and tag along while Daniel went to work, if needed.

“That was really a very positive aspect of this treatment: Asher could still be a kid, and he didn’t have to worry about the struggles and the additional illnesses that come along with the more traditional chemotherapy treatment,” Daniel said.

Asher’s treatment lasted almost nine months. Aside from trips to Children’s to be treated, his life was mostly normal, Daniel said. Eventually, he went into full remission. Now, he returns to the hospital only once a year just to get bloodwork.

“You can say, ‘OK it’s bad, no matter which (type of leukemia) we had.’ But I’m going to be grateful that it’s this and not something else,” Daniel said. “Because with this, it’s much more manageable.”

Asher was one of 154 pediatric APL patients who participated in Kutny’s study, which was coordinated by the National Cancer Institute. Between 2015 and 2019, More than 80 institutions across the Children’s Oncology Group (COG) enrolled patients in the study. It found that the treatment of arsenic trioxide and ATRA without cytotoxic chemotherapy was just as effective as the traditional chemotherapy treatment while being far less challenging to the patient. It’s now the new standard of care for these patients. The study was published in the Journal of the American Medical Association-Oncology in November.

“We’re excited as a COG investigator to be in an era where we can offer patients a far more effective and less toxic approach to treating cancer,” Kutny said.

“This is what we hope represents the future for many childhood cancers, that we can move away from the more toxic and intense treatments toward a more targeted approach that really attacks specifically the genetic changes that occurred in the cell that turned it into a cancer cell.”

Kutny hopes doctors will find ways to refine the treatment process even further in the future. Because the arsenic trioxide has to be administered intravenously, patients have to visit clinics to receive it. This happens daily during the induction phase of the treatment and five days a week during consolidation. This often leads to a lot of absences from school for patients like Asher, who according to Daniel, missed about half of kindergarten while being treated.
Kutny says there are some encouraging early studies on converting the arsenic trioxide treatment to an oral form, which would prevent patients from missing school. That means the treatment that already has set a new standard of care still has room to get better.