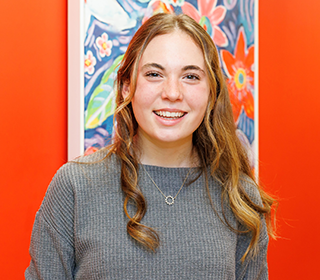 Not much has ever been able to hold back Madeline Matos. Even as a young child, she was vibrant and active. But then, that vibrancy seemed to suddenly disappear. “She hit a certain age—around 18 months—and she wouldn’t walk,” explains her mother, Karen. “She was tested but there was never a clear reason why.”

Without a diagnosis, the Matos family moved on. Madeline continued with her activities—she was taking ballet, happily dancing multiple days a week. But occasionally, it was obvious Madeline just wasn’t quite right. It all came to a head when she was 9 years old and came down with mono. “From that point, she really never felt right,” Karen says. “We were initially told it was all high anxiety—then she was even misdiagnosed with pneumonia—but it never made sense because she was a happy girl. But she was a happy girl who was having some serious physical issues.”

Eventually, those physical issues forced Madeline to stop ballet. Her body was forcing her to slow down, but no one could accurately explain why. “Things just went downhill,” Karen says. “By this time she was 12, and she was unable to walk. She couldn’t cut her own food. She had once been a vibrant girl, and she was being pushed around in a wheelchair and carried up the stairs.”

After too much time in physical discomfort, Madeline once again went to the doctor. On a whim, her mother asked the nurse practitioner, who happened to see her that day, to look at her knee, which was unexplainably swollen. “She took one look and immediately said that’s arthritis,” Karen says. “Honestly, we thought in the moment she was crazy. Madeline was only 12. We had no idea kids could get arthritis.”

An orthopedic appointment soon after revealed Madeline did, in fact, have juvenile arthritis. The next step was to see a rheumatologist, and a family friend insisted that Madeline make an appointment with a pediatric rheumatologist at Children’s of Alabama in Birmingham. “We lived in Georgia, so traveling to Birmingham definitely wasn’t the most convenient,” Karen says. “But it turned out to be a godsend.”

After receiving her medical history, Children’s scheduled Madeline an appointment with Dr. Stoll within three weeks. “Had we waited for a doctor closer to home it was going to take nine months,” Karen stresses. Because of the family’s past experience with doctors trying to diagnose Madeline, Karen wasn’t quite sure what to expect in the appointment. But her fears were soon put at ease. “Dr. Stoll was so gracious and kind,” Karen says. “So was everyone there. It was clear that they were the partners we needed in this journey.”

A treatment plan was soon put together for Madeline, which included putting her on two medications. It also included altering her diet, as Karen had noticed certain foods seem to be worsening Madeline’s physical condition. After a few months, it became clear that while the medications helped her joint swelling, they were making life harder on Madeline—one even sending her into a serious depression. “But the more Dr. Stoll looked into the food aspect, the more it was clear that her diet really did affect the arthritis,” Karen adds.

Dr. Stoll eventually took Madeline off the medications and discussed second-line medications, but also encouraged her to maintain the strict gluten, dairy, and meat free diet, as that seemed to have made a huge difference for Madeline; and she began to blossom. “She starting running 5Ks,” Karen says. “She went from a girl who couldn’t cut her own meat to someone winning 5Ks.”

After years of physical pain and living in the unknown, Madeline is now thriving. She continues to run cross country—she’s now in her senior year of high school and is on her school’s number one ranked cross country team—and she’s not slowing down. She even ran the Arthritis Foundation’s Jingle Bell Run last year, coming in first for her age category. When she was presented with her medal, she, in turn, presented it to Dr. Stoll. “Dr. Stoll and the team at Children’s listened to us when no one else would,” Karen says. “For 10 years, no one listened. Everyone at Children’s listens and they care. They legitimately care about their patients. They cared about us. I just can’t say enough good things about Children’s.”